The Beak of the Finch: A Story of Evolution in Our Time

On a desert island in the heart of the Galapagos archipelago, where Darwin received his first inklings of the theory of evolution, two scientists, Peter and Rosemary Grant, have spent twenty years proving that Darwin did not know the strength of his own theory. For among the finches of Daphne Major, natural selection is neither rare nor slow: it is taking place by the hour, and we can watch. 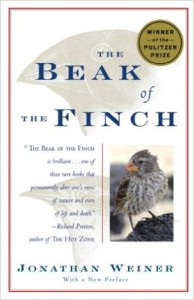 In this dramatic story of groundbreaking scientific research, Jonathan Weiner follows these scientists as they watch Darwin’s finches and come up with a new understanding of life itself. The Beak of the Finch is an elegantly written and compelling masterpiece of theory and explication in the tradition of Stephen Jay Gould.