Let Them Eat Carbon: The Price of Failing Climate Change Policies, and How Governments and Big Business Profit from Them

Ordinary people are paying a ruinous price for the attempts politicians make to greenhouse gas emissions. Climate change policies dramatically raise electricity bills, make it much more expensive to drive to work or fly on holiday, put manufacturing workers out of a job, and sometimes even make your food more expensive. 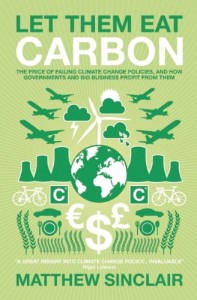 Climate change is big business. Much of the money so-called green policies cost us goes straight into the pockets of a bewildering range of special interests. Around the world companies are making billions out of the schemes governments have put in place saying they will curb global warming and protect us from the threat of climate change. There is little evidence that those policies are an efficient way to cut emissions. They simply do not represent good value, and the public are right to besceptical.

In ‘Let Them Eat Carbon’ Matthew Sinclair looks at the myths perpetuated by the burgeoning climate change industry, examines the individual policies and the potentially disastrous targets being put into place by ambitious politicians, and proposes a more realistic alternative.

Matthew Sinclair is the Director of the TaxPayers’ Alliance (TPA) in London. He has produced a range of pioneering and influential economic policy research, particularly on climate change policy. That work has had a global impact. It has received prominent coverage on the front pages of newspapers from the Daily Express and Metro in the United Kingdom to The Australian. It has also been widely cited in leader columns from the The Sun and the Daily Mail to the Wall Street Journal the day before the vote on Waxman- Markey. It has been cited in evidence to the United States Senate Committee on Environment and Public Works and in the debate in the House of Commons over the Climate Change Act. He has also represented the TPA frequently on radio, television – with appearances on the BBC News Channel, Sky News, Bloomberg, Fox News, CNBC, the Daily Politics and Newsnight – and in person at a range of events both in the UK and abroad –in Rome, Washington DC, Brussels, Strasbourg and New York.