About the Author
LAWRENCE SOLOMON, a world-renowned environmentalist author and activist has been at the forefront of movements to stop nuclear power expansion and to save the world’s rainforests. He is a columnist with the National Post (Toronto), and author of half a dozen books including (Doubleday). Mr. Solomon’s Energy Probe Research Foundation works with citizen groups around the world to stop environmentally destructive projects and to promote sound development.

Global warming is a question for citizens, not just scientists. We must decide how serious the threat is and what to do about it. But how can we settle the fiercely complicated scientific issues involved? Al Gore’s answer is to rely on the argument from authority. Accept the word of the great scientists who really know, who say that global warming is real, caused primarily by humans and will lead to catastrophe if unchecked. 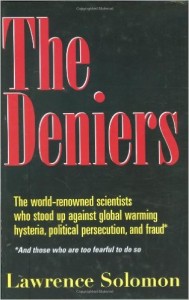 The science is settled, and those who dissent are either crackpots or crooks. Eminent environmentalist Lawrence Solomon was not satisfied with Gore’s answer. He decided to find out whether any real scientists dissent from the Gore/U.N. line. What he found shocked him. Not only were there serious scientists who dissented on every headline global warming issue, but the dissenters were by far the more accomplished and eminent scientists.